Orcas Island, Washington Because Calling It “Procrastination Bay” Would Be Too on the Nose

So last Tuesday went pretty much according to plan. It seemed once the outcome was clear, many on the other side were still able to appreciate the magnitude of what happened; allegiances swayed overwhelmingly, if momentarily, in celebration — sort of like the ending to Rocky IV.

I’ve been discussing the historicalocity of Obama’s victory with those around me whose memories stretch a bit farther back. It’s hard to name a recent event on this scale that wasn’t somehow disastrous. I have to go back to the fall of the Berlin Wall to find something truly world-changing that didn’t involve a massive body count.

I asked my dad if election night felt anything like the moon landing, thinking surely it would pale in comparison. He said no one cried when man first set foot on the moon. It was an awesome accomplishment; inspiring, courageous, but not as emotional — at least not for him. That surprised me.

Another surprise: in an effort to capture the mood of that night, The Daily Show chose a familiar reference.

I got a text message from a friend a few minutes after it aired on the east coast. It was the first I’d heard about them using footage and music from the dancing video.

I’ve been asked many times if they contacted me in advance for permission. My answer: “you’d think so, wouldn’t you?”

But there are no hard feelings. Good God, no. I’ve had a lot of amazing things happen to me in my life. Seeing myself appear out of the blue on my favorite TV show is near the top.

I’m on Orcas Island right now working on the book. 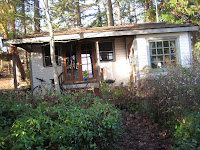 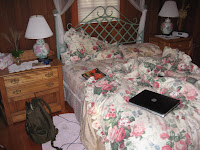 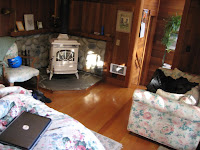 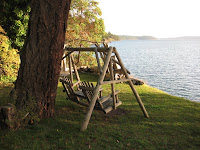 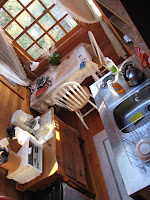 I got a single-room cabin to ween myself of distractions and finally get cracking on it.

Writing this journal has always been hard for me. I manage to cover, at best, about half the stuff that goes on with me. The rest goes undocumented as a combined result of laziness and intimidation at the prospect of stringing together suitable words. I’m finding both of these obstacles amplified by the advent of print.

I’m a highly self-critical writer, and like a lot of writers, I find the activity itself to be an unpleasant step on the way to the reward of having written. Lately I seem to have passed a theshold that’s taken me from self-criticism to self-loathing. Feelings of inadequacy lead to feelings of futility, which lead toward inaction, which fuels the very same feelings of inadequacy.

Objectively, I recognize this as a depression spiral.

And I’d like to think it’s just a part of the process; a necessary step on the way to getting this goddam book done — or at least started. Hopefully, once I hate myself enough, I’ll bully myself into writing something no matter how bad it is.

And that’s how sausage is made.

Orcas Island is the largest in the San Juans. It sits in the belly of Puget Sound, about a dozen miles from the Canadian border. 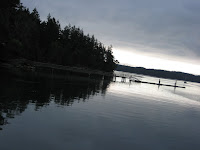 I flew here on a small, local airline that operates out of Boeing airfield. I was going to fly out on a float plane, but the weight restrictions were too low to bring my bike, so I switched to a Cessna Caravan. The flight itself was stunning, with sweeping views passing over the city and surrounding region. Melissa got me an introductory flying lesson for my birthday, so that stuff is all suddenly even more fascinating than usual.

We landed at sunset on the north end of the island and my cabin is near the southern tip, about seven miles away. There are no grocery stores near the cabin, so in addition to 35 pounds of luggage, I had to carry food for five days on my back, which added another 15 or so pounds. I crammed everything into my giant Osprey bag, put the GPS in my jacket pocket, and set sail.

Here’s a thing I learned: going up hills is a lot harder with 50 pounds on my back. I ended up having to get off my bike and walk at the slightest hint of incline, so the long trek became less like cycling and more like cross-country skiing. Slog up a hill, roll down. Slog up a hill. Roll down.

My cabin is in the not-at-all disturbingly-named region of Massacre Bay. I’m sure it’s not called that because of some guy who breaks into secluded cabins at night and hacks tourists into pieces. It’s probably just some terrible thing that happened to an indigenous tribe centuries ago.

Water under the bridge. 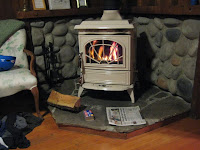 I’ve learned to enjoy my wood-burning furnace. My earliest attempts didn’t pan out and the rain has made the kindling a bit less accommodating, but I’ve sorted it now. While I do have automatic heating at the twist of a dial, I prefer the kind that you have to cultivate and maintain. A fireplace is a satisfying blend of creation and destruction.

…so the book is basically a collection of anecdotes about making the videos. Each chapter starts with a big still image of a particular clip and then goes into a story either directly or peripherally related to shooting it. Between all the different dancing videos, I’ve put out about 150 different clips. I’m hovering around 80 right now that I have something worthwhile to say about, and expecting to hone that down to around 50. I’m pulling what I can from the journal and tightening it up, but a lot of material will have to be written fresh.

One issue I’m struggling with is whether to cap each section at about 500 words; a nice two-page spread with some accompanying photos, or to let things flow more like the journal and allow some stories to stretch on for a dozen pages or more. I want the book to be light and accessible — something you’d pick up in Urban Outfitters and flip through casually without really thinking about a beginning or an end. That inclines me toward a short, rigid format. But the temptation to prattle persists.

My site is down right now. If you’re reading this, it probably means I got it working again. I’ve been writing to my host every day and they’re saying it’s not their fault. Still diagnosing.