Kenny G is a really nice guy. I mean like ridiculously nice. He makes wilted flowers bloom with his aura.

Melissa and I sat behind him yesterday on our flight from LA to Tokyo. Nick, our traveling companion, chatted him up without having any idea who he was. Nick somehow managed to slip in that I am "famous."

I’ve had the good fortune to fly first class once or twice. I’ve never been able to do it with someone. Kenny G helped Melissa and me get seats next to each other. 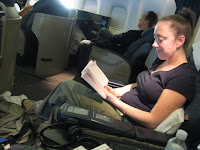 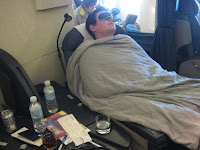 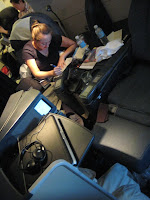 He also helped the flight attendant pass out drinks, and later bathed the cabin in smooth adult contemporary jazz.

Hancock and Baby Mama were both way better than I thought they’d be.

They gave us free earplugs in our little kit things, so guess what happened there. 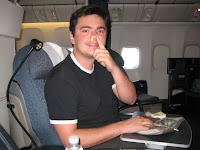 I went to Minneapolis last month for a speaking engagement. It was a gathering of animal feed salespeople from around the world. I talked for a few minutes then invited everyone up to dance on stage. That seems to go over well. Speaking has become an unanticipated side occupation that I very much enjoy. I’m not very good at it, but I’m learning a lot.

Flew out to New York for a Google event. They gave me a Garmin GPS device, which I cherish and hold close to my bosom. Also met with my publisher. Still shooting for May with the book.

From New York I flew straight to LA. Had dinner with my friend Courtney, who’s working on that Christian Slater show that premieres in a couple days. After that I picked Melissa up at the airport. It was getting close to midnight, but she’s seen very little of LA, so I got us a convertible and took her on a wee-hours driving tour.

We drove from LAX to Santa Monica, up the PCH to Malibu, then inland through the valley and down to Mulholland. We came out on Sunset, drove through Bel Air and Beverly Hills, then along Hollywood Boulevard, down to Melrose, West Hollywood, Rodeo Drive to Wilshire, through Westwood, onto the 405 and back to the hotel.

The drive would’ve taken 8 hours during the day. It took us about 2.

Morning flight to Tokyo and here we are. They gave us robes in our hotel room. Guess what happened there. 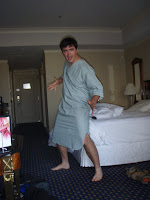 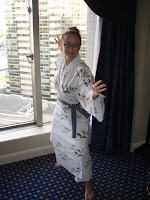 I’m looking forward to a break from this damn election. I’ll be home for the last few days of it, then I can vote and be done with it.

Some fun facts about Kenny G, courtesy of Wikipedia:

– Kenny G has sold over 48 million albums.
– Kenny G is a founding investor in Starbucks.
– Kenny G holds the Guinness record for longest note ever recorded on a saxophone. He played an E-flat for 45 minutes and 12 seconds.

Someone created an annotated version of the 2008 video highlighting details that often go unnoticed. Some of them I’ve never even noticed. It’s pretty funny.